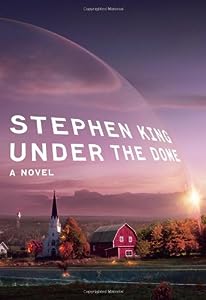 Have you seen the ads for the new CBS series based on Stephen King’s Under the Dome? They caught my eye a few weeks ago and every little teaser commercial drew me in a little further.

I probably won’t watch the series when it starts on June 23.  It’s Science Fiction, may be scary, and it has Stephen King in the title. Any of those three items would cause Richard to reach for the remote.  I accepted this long ago, about the same time I accepted that the remote belongs on the table by his recliner, near his right hand. Not mine.

Many women would fault me for this, say at the very least I could go watch TV in another room. But we’ve been together almost 50 years now and I believe spending our evenings together in the same room is one of the little things that keep our marriage strong. Sometimes, when he’s watching a western (or one of those movies that alternate between fist fights, gun fights, and car chases) I will sit beside him reading my book. We’re in different worlds in our heads, but it’s nice to see each other  during the commercial/snack/bathroom breaks.

Sorry, I got off the subject, didn’t I?  Under the Dome is one of King’s books that I missed when it came out. I’ve  been a sporadic King reader. I loved his early work (along with the rest of the world) but never made an effort to read each omnibus as soon as it came out.  The TV ads made me decide to get a copy and read it. Started it on Saturday, finished it about noon today (Tuesday).  It’s a long book, 1,088 pages, and I do have a life going on that forced me to go hours at a time without reading a word.  During these past three days,  I never once  put it down willingly or easily.  The action and suspense are non-stop and nearly every chapter ending  is a cliffhanger.

The story isn’t primarily about the Dome, it’s about the Town and all the people who live there. Under the Dome deals with the horrors of the world around us. Forget ghosts and vampires and space aliens–there’s nothing as horrifying as what humans are capable of doing to one another. Stephen King knows that: it’s the reason his stories are so effective.

Some reviewers have complained about the large cast of characters. Seems they had trouble keeping track.  I never had a problem, every single citizen of Chester’s Mill is so well drawn they were completely real and memorable to me. Even the dogs! There were three of them, belonging to three different families. Each one had a distinct personality and a reason for being in the story.

Under the Dome should make a wonderful TV series.  It held me captive right up to the very last page.

This entry was posted in Books & Libraries and tagged book review, CBS, Fiction, Miniseries, Stephen King, Under the Dome. Bookmark the permalink.

This site uses Akismet to reduce spam. Learn how your comment data is processed.